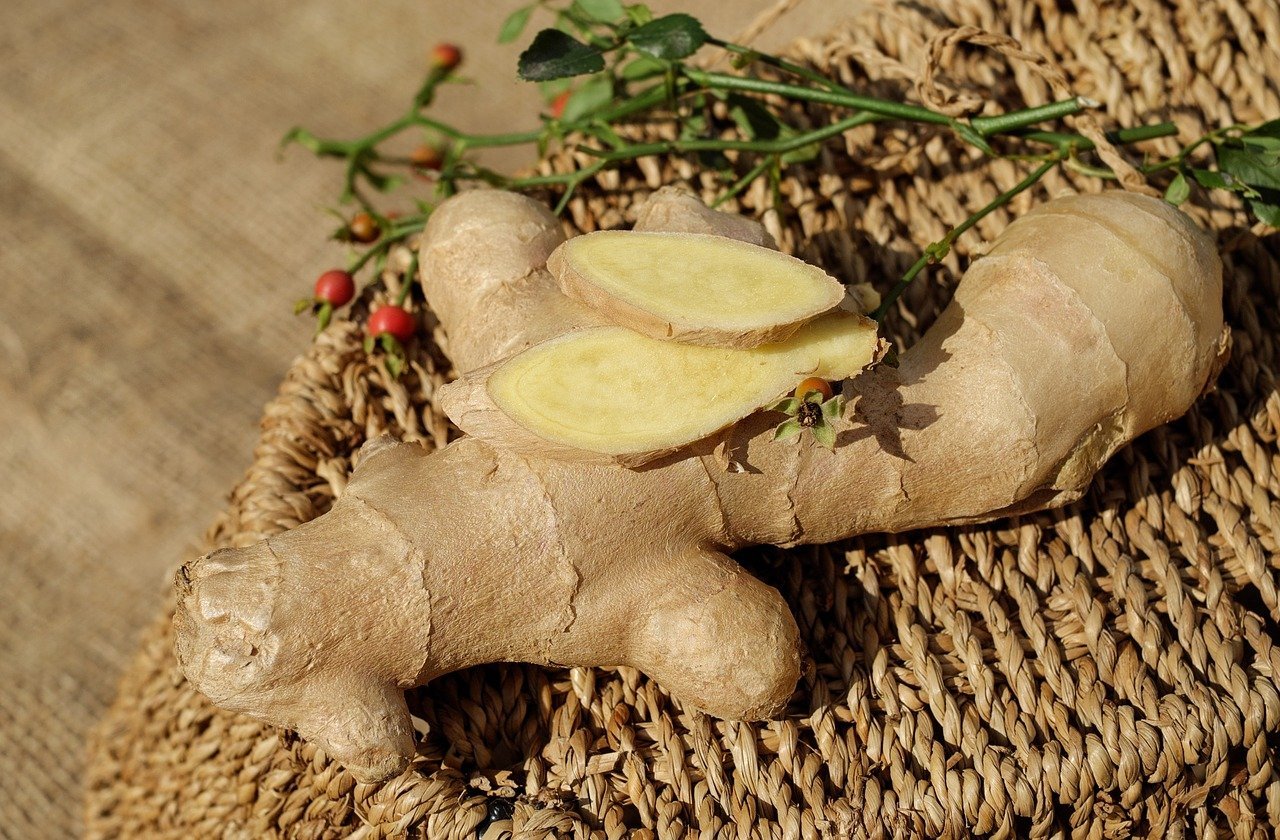 Ginger originated in Southeast Asia and is known to be among the healthiest spices available. The part of the ginger plant that is most often used is called the ‘rhizome,’ which is the underground part of the stem and is sometimes referred to as ‘ginger root.’

Ginger is often taken as a supplement via tincture or capsule by individuals due to its several reported health benefits. It is often used as a home remedy to treat nausea, stomach pain, and stomach upset – but research indicates it may have many other health benefits, including potent anti-inflammatory properties.

The antioxidant properties in ginger have been shown to be beneficial toward preventing and relieving arthritis, inflammation, and high blood pressure. It has also been linked to reducing the risk of diabetes and cancer in small studies.

Ginger’s fragrance comes from its natural oils. One of the most important natural oils contained in ginger is ‘gingerol.’

Gingerol has been shown to reduce oxidative stress which can be caused by an excess of free radicals in the body. In addition to this, ginger is shown to have anti-cancer properties accredited to this gingerol compound. Some studies have shown that ginger can reduce one’s risk for pancreatic, liver, breast and ovarian cancer.

Gingerol is also believed to assist in fighting and lowering the risk of infections. Ginger extract stops the growth of several forms of bacteria and is also effective against fighting several types of oral bacteria that have been linked to gingivitis and other inflammatory gum diseases – it seems like ginger extracts and tinctures may be beneficial for improving oral health and gum health.

Moreover, ginger is possibly best known for its ability to treat nausea and morning sickness. It has been proven to assist in preventing nausea and vomiting as well as nausea specifically caused by chemotherapy.

The majority of the researched benefits of ginger on nausea have been seen in pregnant women who experience morning sickness. Several studies which observed a total of 1,278 pregnant women observed that taking 1.1 to 1.5 grams of ginger can noticeably reduce symptoms of nausea and stomach upset. Ginger is considered safe for consumption; however, it is recommended that pregnant individuals speak to a doctor before consuming large amounts – ginger is known to act as a blood thinner and reduce blood pressure. It’s important to consult with a doctor if you have a health condition, or are already taking pre-existing medication for any illness.

It has been suggested that ginger can assist with weight loss and managing health conditions associated with obesity. A 2019 review proved that ginger supplementation helped to significantly reduce the weight of overweight and obese individuals. Additionally, a study that was completed in 2016 that observed 80 obese women who consumed 2 grams of ginger powder daily over a 12-week period found that ginger played a significant role in reducing body mass index (BMI) as well as blood insulin levels associated with obesity. It is believed that ginger’s ability to assist in weight loss is closely linked to its capability to increase the number of calories burned and the reduction of inflammatory markers in the body.

What about joint pain? Ginger also appears to assist in managing symptoms of osteoarthritis. Osteoarthritis is a condition that results in the slow deterioration of the cartilage cushion found at the end of the bones and in one’s joints. This causes joint stiffness and pain. A study found that individuals who consumed anywhere from 500 mg to 1 g of ginger per day, over a 3-to-12-week period, saw a substantial decrease in the amount of pain they were experiencing.

There is some evidence that implies that ginger plays a role in supporting cardiovascular health and assisting with cardiovascular diseases. A study found that taking 5g or more of ginger can cause antiplatelet activity – similar to the effects of aspirin. This is likely because the ‘compound’ – salicylates that are naturally found in certain foods in high amount (ginger being one of them) has strong antiplatelet effects and well as blood thinning properties. Salicylic acid is what aspirin is actually derived from!

This means that the ginger assisted in preventing platelets in the blood from sticking together, in turn reducing the risk of blood clot formation and cardiovascular event – similar to the benefits derived from aspirin use.

Ginger has also been proven to significantly reduce dysmenorrhea, which is pain experienced during the menstrual cycle. A study completed in 2009 compared the pain-relieving effects of two nonsteroidal anti-inflammatory drugs against those of ginger powder. The study had 150 women either consume 250 milligrams of ginger powder, 250 milligrams of mefenamic acid or 400 milligrams of ibuprofen four times daily to observe the effects it had on menstrual pain. It was concluded that the ginger powder assisted in reducing menstrual pain as effectively as the two nonsteroidal anti-inflammatory drugs that were used. Recent studies have also concluded that ginger powder is more effective in reducing menstrual pain than a placebo and equally as effective as non-steroidal drugs. However, it has been noted that these studies were quite small and larger, more in-depth studies are still required to solidify these findings.

An older study completed in 2008 found that individuals who consumed 3 grams of ginger in capsule form per day saw a 10 percent decrease in LDL cholesterol levels over a 45-day time frame. Consequently, apart from lowering LDL cholesterol levels, ginger has also been found to reduce total cholesterol and blood triglyceride levels.

Last, but certainly not least, ginger has also been linked to improving brain function and providing protection against Alzheimer’s Disease and Dementia. It is believed that oxidative stress and chronic inflammation can hasten the aging process and contribute to beta-amyloid abnormally clumping together. This has been linked to the development of Alzheimer’s disease and age-related cognitive deterioration as the nerve cells die from the inflammatory immune response, the oxidative stress, and the clumping together of this beta-amyloid plaque.

Antioxidant properties in ginger have been proven to provide an anti-inflammatory response within the brain. Gingerol, as well as other compounds in ginger that specifically give ginger its noted health benefits have been shown to be able to effectively cross the blood-brain barrier (BBB). Additionally, a study that was completed in 2012 which gave women a daily dose of ginger, found that reaction times and memory of those that participated had markedly improved.

Ginger certainly seems like a vital root to incorporate into one’s diet! Supplementation with capsules or tincture seems to assist in chronic pain, inflammation (reducing cytokine production as well), high blood pressure, digestive upset and nausea. As it also lowers the risk factor for several diseases – including cancer, heart disease and stroke, it seems like an obvious choice to add ginger to the spice rack or to the supplement stack. Just be sure to consult with a medical practitioner if you use any blood thinners or prescription medication or have any health conditions involving low blood pressure or blood clotting.